In late November, presumed North Korean hackers targeted Sony Pictures Entertainment in an unprecedented cyber attack. This resulted in the exposure of thousands of sensitive emails from Sony executives and threats to release more if the release of the film “The Interview” wasn’t canceled.

While this breach was indeed historically devastating, it’s not the first successful cyber attack on a big corporate powerhouse.

David McCandless and the folks over at Information Is Beautiful have put together an amazing infographic with the biggest data breaches in recent history. You can see when the attack happened, who it happened to, and how large the impact was.

I always encourage my social media friends to reset all of your passwords each new year. Now is the time to do so.

Steve Heller, Alberto Cairo, and The World in Terms of General Motors

The other day on Twitter, Albert Cairo tweeted about a great visual map he found in a 1938 issue of Fortune Magazine at Steve Heller’s Moving Sale on Saturday, June 28th, 2014 in New York City. 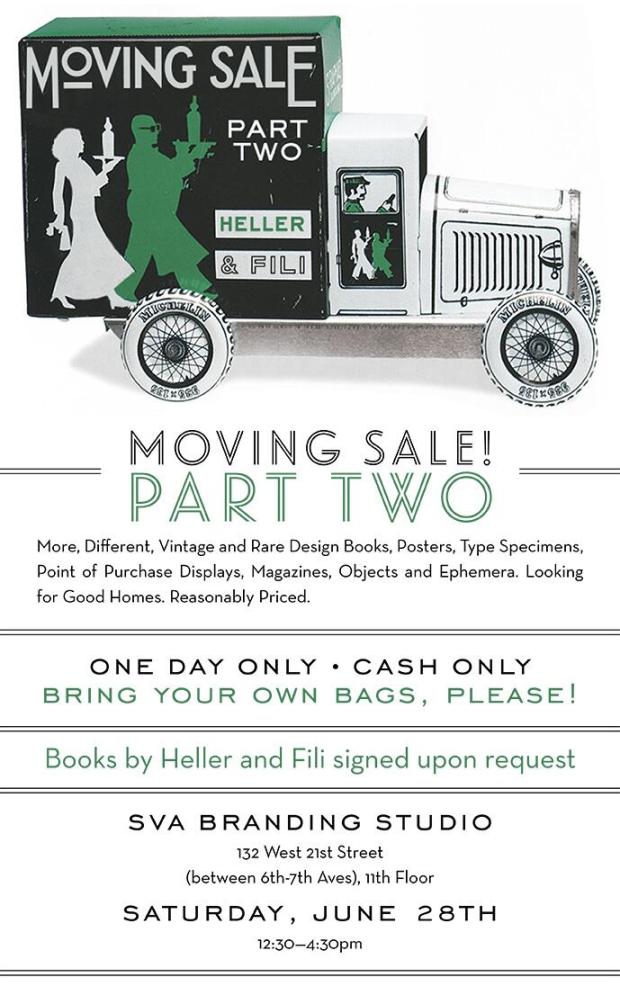 He is the co-founder and co-chair (with Lita Talarico) of the MFA Designer as Author program at the School of Visual Arts, New York, where he lectures on the history of graphic design. Prior to this, he lectured for 14 years on the history of illustration in the MFA Illustration as Visual Essay program at the School of Visual arts. He also was director for ten years of SVA’s Modernism & Eclecticism: A History of American Graphic Design symposiums.

The visual in the December 1938 issue of Fortune Magazine was called The World in Terms of General Motors. It depicted a sketch map showing the location of (then) GM’s 110 plants. The spheres representing each plant are proportional (in volume) to their normal number of workers. The key numbers of the spheres are indexed on the map. The map does not include those manufacturing plants in which GM has less than 50% stock. The principal ones are Ethyl Gasoline Corp., Bendix Aviation Corp., Kinetic Chemicals, Inc., and North American Aviation, Inc.

Not shown are GM’s many non-manufacturing interests, domestic warehouses, etc.

So, finally, here is the complete map. 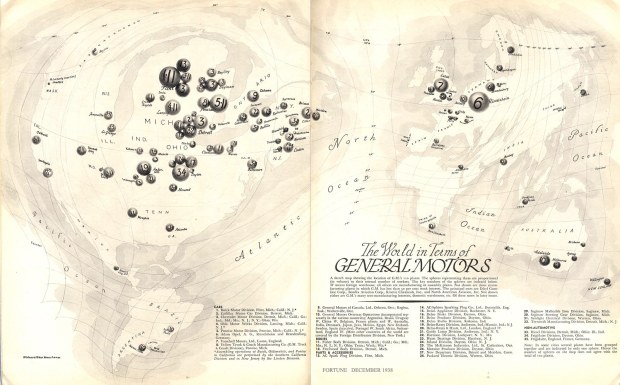 The presentations from MicroStrategy World 2014 – Las Vegas are now available on the MicroStrategy web site. However, you are going to have to work a bit at getting them.

To access the PDF files of the presentations or watch the videos available, you must have established a Resource Center account with MicroStrategy and you must have downloaded Usher Identity to your smartphone.

I have included the instructions below that MicroStrategy has provided on how to access these PDF files and videos. I have added annotations (in blue) where I felt it will help you along in the process.

Link to the Presentations

The link to MicroStrategy World 2014 – Las Vegas session presentations and videos is:

My comment: Saving the PDF files to your hard disk from the sessions seemed to work best using Mozilla Firefox, then Google Chrome, and then Internet Explorer 11. I recommend you install Mozilla Firefox on your PC or laptop for situations like this where IE acts funky and won’t cooperate.

For support with the Usher application or in gaining access to the sessions, please reach out to support@usher.com. 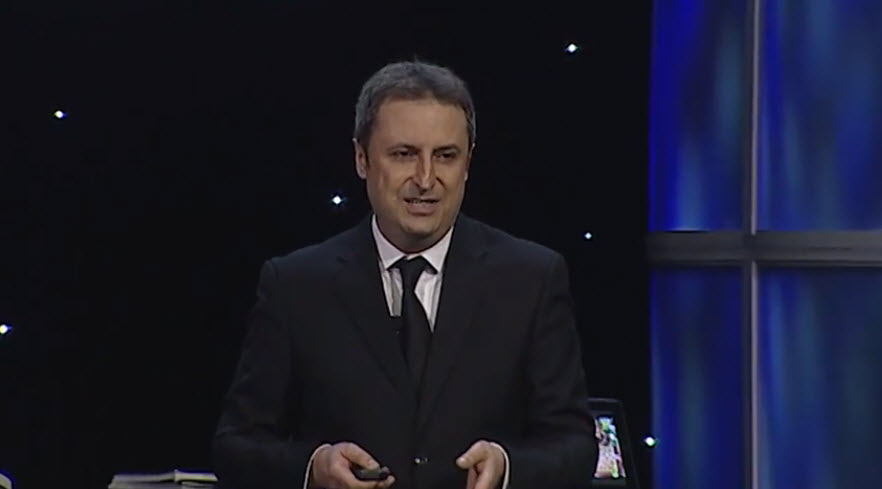 While some vendor conferences can end up mired in technical minutiae, MicroStrategy believes it’s better to show, not tell customers how its BI (business intelligence) software works, according to its president, Paul Zolfaghari.

”More than 50 MicroStrategy customers will deliver presentations at the event, which has about 130 sessions planned in total, according to a statement. They include BMC Software, Flextronics, Nielsen, Panda Restaurant Group and Publicis Touchpoint Solutions.

Scheduled for keynotes are Facebook CIO Tim Campos and Gucci CIO Simone Pacciarini, who will discuss their use of Microstrategy technology.When it does discuss products at the event, Microstrategy plans to showcase its recently released Analytics Desktop, a self-service BI tool that is available at no charge, as well as its push into mobile BI, Zolfaghari said.

Mobility has transformed the BI market, in Zolfaghari’s view. Five or six years ago, companies largely ran some internal reports and rolled the results up the corporate food chain, he said. “What’s happened is BI has now moved massively outside of HQ.”

It’s also likely MicroStrategy will discuss the massively parallel in-memory computing architecture it’s been working on with Facebook. The technology should be commercially available from MicroStrategy later this year, showing up first in MicroStrategy’s cloud BI offering, according to Zolfaghari.

The conference comes as MicroStrategy, the industry’s last remaining large pure BI vendor, faces ever-stiffer competition from platform companies such as Oracle and SAP, as well as upstarts like Tableau and Birst.

But MicroStrategy is keeping an edge thanks to a number of key strategic decisions, according to a recently released Forrester Research report on the BI market.

”MicroStrategy has grown organically and architected its entire suite as a single platform,” analyst Boris Evelson wrote. “Forrester clients find that, after making the initial investment and effort in MicroStrategy, the reusability of all objects and the relational OLAP engine with drill-anywhere capability often result in a lower long-term total cost of ownership.”

Forrester clients are also having success rolling out mobile BI based on MicroStrategy’s platform, Evelson said.

But there’s some cause for concern over MicroStrategy’s “high reliance on a largely disappearing network of partners, many of which have been acquired,” for architectural components such as ETL (extract, transform and load), data quality and MDM (master data management), Evelson added.

Zolfaghari downplayed the impact of its partners being acquired, noting that Informatica, a major provider of such tools, remains independent. MicroStrategy also maintains “robust relationships” with companies such as IBM, SAP and Oracle, he said.

I recently found out I am one of the 2014 winners of the MicroStrategy World Dashboard Contest. I was also one of the winners last year.

I get a free pass to MicroStrategy World in Las Vegas which is the last week of this month. Last year, they gave us awards too. Not sure yet if they will do the same this year.

An Exploration of Tax Data

My dashboard is an exploration of tax data. It explores taxes rates for the top ten counties in terms of GDP.

I used horizontal stacked bar charts instead so that the viewer can visually see how social security and income tax rate add up to the total and explains visually why the countries are ordered the way they are on the dashboard. I also separated out $100K and $300K percentages into separate visuals.

In addition, I added the flags of the countries. Yes, I know, chart junk!

Now, you don’t see any numbers on the data points in this dashboard. The reason you don’t see them is because they appear when you mouse over a bar where you then see the country, category and the percent value as a tooltip.

Here is a screenshot of my entry. It was written with MicroStrategy v9.3.1, Report Services and the Visualization SDK.